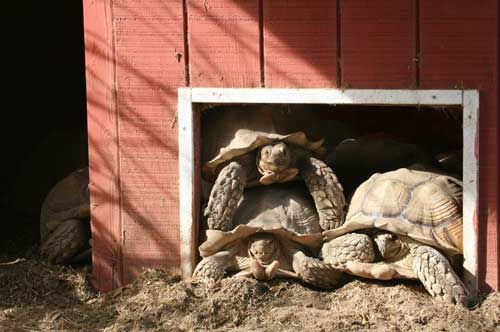 When I first started keeping sulcata tortoises, there was a floor in their barn. It had to be cleaned often, and it was very smelly because of bacteria growing on the floor. I noticed the animals had a hard time settling down at night. They would stick their noses in the corners and then keep scratching at the floor. I also had a pig blanket, controlled with a thermostat and timer under the floor. I realized the animals did not have floors or pig blankets in their burrows. So I removed the floor and the pig blanket, and put down a lot of straw to see how they would react. The very first night, they went in and scratched around for awhile and settled down. They did not scratch at the floor any more. They did still stick their noses in the same corner every night. I have not used a floor in their barn for the last 24 years. 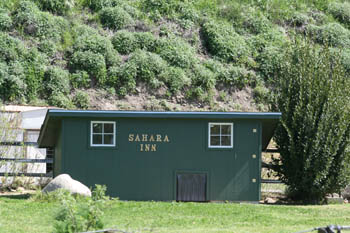 The green barn is 16’ long x 6’ wide x 6’ high, the red barn is 14’ long x 8’ wide x 6’ high. It is not necessary to make the buildings six feet tall, it is my personal preference. Having so many animals sharing the same bed, it makes it easier for me to get in the barn if there is a need. The house walls and ceilings are insulated with regular 3” capsulated fiberglass with wood paneling outside and inside. Each building has a man door and a tortoise door for the Sulcatas to go in and out as needed. In the colder part of winter I put the wooden tortoise door down to keep the heat in. 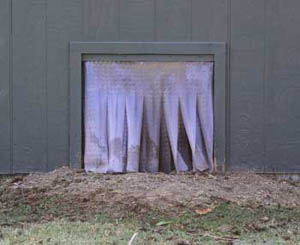 Infrared bulbs - I use one and sometimes two – are suspended from the ceilings in the tortoise barns. I never use pig blankets for purposes of heating; the burrow floors are not heated. Sulcatas are shaped to be warmed from above. I personally find no use for or benefit from a pig blanket.

One evening in 2010, a veterinarian friend was visiting, and, of course, we were talking about tortoises and temperatures. We took the temperature gun out about 9:30 pm, with the outside temperature about 28°F (-2.2C), and checked the carapace temperatures in the green barn. The average individual carapace temperatures of the tortoises were in the mid-40's F (mid-4's C). The next morning I decided to check them again. This time I checked under them and was surprised to find the plastron temps to be in the mid-50's F (mid-teens C). They have lived like this for over twelve years. They come out in the morning to warm up and start grazing.

I have to share my experience with two wild caught Sulcatas, both females, I am keeping for someone. The oldest one, from known history, is about seventy years. She appears to have been tethered, probably in a village, and her carapace is well worn from years of mating. The younger female is maybe sixty years. When I tried to put them in the barn at night, they broke the door several times to get out. I put up a stronger door, so they dug out.

The younger one took over a burrow that another animal abandoned for the warmer barn. She spent the entire winter in her burrow. I would check her caparace and the burrow temperatures. Her caparace would be in the low to mid-thirties (approximately -1.1°C), the burrow 45 to 50°F (7.2 to 10°C), and under her in the mid-fifties. She did not always go all the way in the burrow.

The older one refuses any kind of shelter, even though I tried to cover her with an insulting blanket. I would find her in the morning with frost on her carapace! When I checked her plastron temperature with a digital thermometer, it would be in the mid-fifties Fahrenheit (mid-teens Celsius).

She has two spots in which she likes to spend the night: one is under the sycamore tree in a depression from a collapsed burrow, that had filled with leaves. She would flip the leaves until she was almost entirely covered.

The other spot is outside the door of the red barn where there is a pile of "stuff" that has been kicked out of the barn that is about 8 inches (20 centimeters) deep. It is just like the "stuff" in front of a natural burrow. She will scrunch herself until she is about half-buried in this insulating material and settles down for the night. 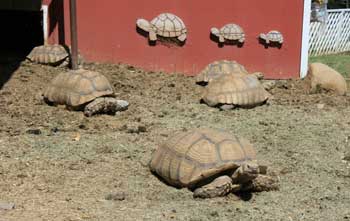 Referring again to Devaux's The Crying Tortoise, page 65: Outside temperatures of -7°Celsius (19°F), in the burrow, 15°C warmer, equals about 46 ° Fahrenheit in the burrow.

Sulcata tortoises do not need to be kept at 60°F (15.5°C) or above at night! Let those babies cool down at night, no nightlights, no pig blankets. Your house temperatures are fine, maybe even too high. Some of my sulcatas will slow way down in the winter and not come out for several days, maybe a week or more.

There are no floors in any of my buildings; there are no floors in their burrows. This creates a more natural feel for the animals. When I first build a new shed I use regular straw, about twelve inches deep, they add their fecal material and urine, if needed, I will add new straw in the fall.

This gives them time to get used to the change, and they do notice change! In a very short time they mix it all up to their satisfaction. I used to clean it out about every three months, but I have not cleaned out their barns in several years. Just like a natural burrow, once in a while the tortoises rearrange things and kick some of the substrate out their door. It never has an odor.

Sulcatas like to have a tight feel to their sleeping area, they get down in the substrate, sometimes flipping it around and over themselves, this helps to make up for the lack of having enough corners to head into. Sometimes I have to put a 2" x 6" board on a 45-degree angle across the corner to discourage digging in the corner. When a sulcata tortoise heads into a tight area, they naturally like to dig a little to get comfortable. I have had them dig all the way out of their barn during the night.

I have found that igloos (Petmate's Dogloo®, the domed doghouses made of structural foam) are not good houses for sulcata tortoises. There are no corners and they cannot get the natural feel of the burrow floor. You can remove the floor and add about twelve inches of straw. They need to defecate and urinate in their sleeping area to create their natural microclimate. Besides, if you need to heat the igloo, you cannot sufficiently insulate it, and your energy bill goes up.

The igloo is good to use as a shelter over a burrow to protect from winter rains, if you can figure out how to secure it, otherwise you may find in it in the next county!